I can’t get behind a guy who raps on the side with a stage name of “Prozak” but maybe you can. Or maybe you don’t care and are only interested in the evidence. Here ya go:

‘Haunting in the Heartland’: Steve Shippy investigates the infamous Dilgert house in Kansas’ most haunted town

In ‘The Binding’, siblings Keli and Rob Adams describe overwhelmingly eerie experiences in the Dilgert house basement, causing several contractors working on renovations in their Atchison home to flee in fear 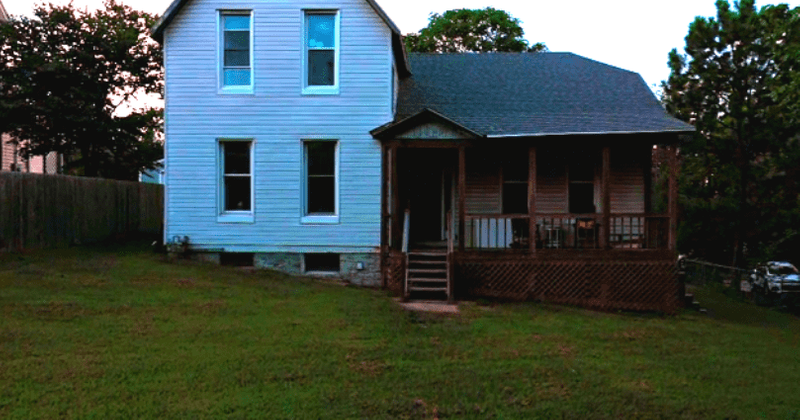 Atchison is a small town to the north-east of Kansas, founded in 1854 and inhabits an estimated 10,000 residents. Over the 150 years since, the historical town has gained national recognition for being the bedrock of unexplained, supernatural phenomenon.

It is home to not one, but multiple haunted locations that are notorious for paranormal activity and has hence garnered a large crowd of tourists.

Residents are well acquainted with the age-old lore and myths from their childhood. Maria Miller, a local historian said a major theory behind the town being haunted is because it is prominently built out of limestone. The mineral is porous and can supposedly hold spirits and allows them to move around freely.

In this episode of ‘Haunting in the Heartland’, Steve Shippy travels to the most haunted town in Kansas to help brother-sister duo Keli and Rob Adams with their uncanny plight.  The Adams are owners of the Dilgert house and believe that the establishment harbors dark secrets after they fall victim to unpleasant happenings.

The siblings acquired the antique house in a rundown state and decided to go about renovating it to bring it back to its former glory.

They hired many contractors and workers who suddenly quit complaining about bizarre experiences like hearing footsteps, seeing shadowy apparitions and even the mysterious appearance of a mangled blackbird.

Adam Dilgert, a German immigrant who arrived in Atchison somewhere in the late 1850s, was the town’s first contractor and stonemason. He was very well-respected and practically laid the foundation for the community. He had a limestone quarry and is accredited for most of the town’s infrastructures built between 1866 and 1894.

He built a modest home for his family — his wife Mary and daughter Barbara — in 1880. His great-niece Frances also lived there. There were additions made to the house in 1895 and 1905, respectively. Keli bought the house in 2014 and began renovations on the house to restore it to its former self.

Keli and Rob believe that the basement in their home is the epicenter of the unnatural activity and are terrified to step foot in the room. When workers began to fix-up the basement, they found old cavalry boots from beneath the floorboards of the original living room.

Dilgert had served in the Civil War and it was European tradition to inlay boots into the infrastructure of the house as a form of protection. As soon as the boots were discovered, Keli said the eerie unexplainable activities began to occur and they would often see shadowy figures in their periphery.

The basement of the house is a whole different story. Keli and Rob believe that it is the epicenter of all the supernatural incidents they’ve encountered. The contractors would hear footsteps or feel an occasional grab or a pull. When they would try to walk out of the basement, a force would try to pull them back towards it.

Rob even explained an incident where he once stood at the bottom of the stairs to the basement and his pants had been pulled down. Keli described a certain area within the basement as being especially “dark, thick, negative and foreboding” and also claimed that it emotionally overwhelmed her.

Shippy accompanied the siblings to the basement and noticed the room began to heat up. Rob and Keli both felt tingles spread across their body and began shaking, while they were engaged in a conversation.

In another instance, Joey, the former contractor for the house said he had found a blackbird on the floor one day. While its appearance there itself is a mystery, its eyes had been gauged out but the body was still soft and slightly mobile. Even so, it had petrified him enough to discontinue his involvement in the renovation project.

At least seven presences have been detected to be inhabiting the old house, each with contrasting personalities. The four on the main level seem to be harmless with no evil or malevolent intentions. These are the spirits of Adam, Mary, Barbara and Frances.

The basement, however, feels thicker with dark aura compared to the rest of the house.

It is also said that in 1880 Adam accidentally killed his brother, Ferdinand, and he could also be haunting the house.

Shippy set up equipment in various rooms on all floors of the house and immediately began to hear footsteps as the devices went off notifying otherworldly presence.

The signals were constant, which took Shippy off guard and let him know that there were, in fact, multiple spirits in the house. He believes the spirits of the Dilgerts are bound to the house through a ritual Adam had performed on his cavalry boots.

Shippy also investigates the infamous Sallie house (also in Atchison) hoping to draw inferences to help crack the Adams’ case. His interaction with the spirit through the Geoport (a tool that helps to communicate with spirits) is chilling, and he realized how truly powerful the haunting is.

Catch ‘Haunting in the Heartland’ every Friday at 11 pm ET/PT on Travel Channel.